This is a new blog focused on all things revolvers: Revolvers Only! In a world full of plastic fantastics, the steel wheel gun appears to be forgotten.

Here is a bit about me before I get any further into the topic. I recently discovered revolvers after shooting polymer wonders for a handful of years. I am not prior military nor law enforcement. I am just a guy who enjoys the shooting sports. Here is a current picture:

I started shooting as a young adult. I purchased a 1911-22, for my 22nd birthday. As a city boy, I had little experience with firearms up to that point. After learning the basics, it was time to get serious about shooting. Sadly, a revolver was the furthest thing from my mind.

Despite my experience with the 1911-22, even steel frame auto loaders were ignored in favor of a steel slide riding on a polymer lower. I ended up with a double action/single action Beretta. Moving from a single action to a DA/SA was a nightmare. This was quickly traded toward the most ubiquitous double action only striker fired handgun available: the Glock 17.

Fast forward a few years, and this is the rack that normally rests on the top shelf of the safe: 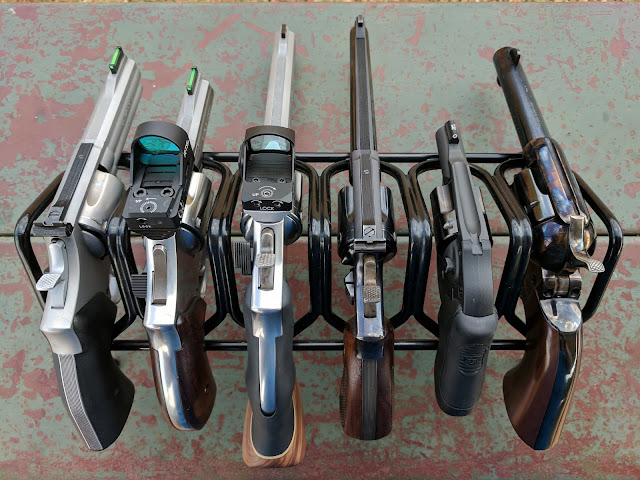 While there may be several reasons, striker fired pistols just became dull. This became particularly apparent when the new single stack polymer wonder wasn't holding my attention after months of practice. Naturally, I started looking for something else. At one of the local IDPA matches, I noticed the club president shooting a really fancy-looking Smith & Wesson 686 SSR. After a short discussion, he mentioned a 686-1 he would be willing to trade for that same plastic fantastic. That trade resulted in a (growing) collection of revolvers of all sizes.

Learning the double action trigger and mechanics of the reload proved to be difficult, especially as a lefty. Revolvers offer a new and exciting challenge and I intend to use this blog as a way to document my experiences. I'll try to keep the entries exciting and include as wide a variety of topics relating to wheel guns as I can. This will include reviews on revolvers, parts, gear, competition experiences, and more!

I will do my best to add a new post on Wednesday in honor of Wheel Gun Wednesday. Thanks for reading.