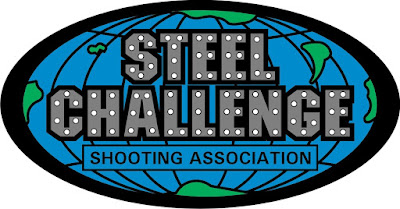 What is Steel Challenge?

Steel Challenge was founded in 1981. The game follows a simple concept: shoot all five steel plates as quickly as possible. There are only eight different stages in regular competition. Each target requires one hit but the last plate, the stop plate, must be shot last to stop the timer.  The sizes of the steel plate range from 10 inch circles all the way up to 18x24 inch rectangular plates. All the steel is relatively close so it is harder to miss...in theory anyway. The best part is getting to shoot all the stages five times and keeping the best four. The only exception to this is a stage called Outer Limits which is four strings keeping the best three.


Sounds easy right? Well, it is very easy to compete but very difficult to win. One thing I noticed was the wide assortment of firearms. Steel Challenge has several different divisions to choose from to ensure everyone who wants to shoot is included. Mirroring USPSA divisions include: Open, Limited, Production, Single Stack, and Revolver. Even the newer USPSA divisions like Carry Optics and Pistol Caliber Carbine have been added. There are also rimfire specific divisions with a few special rules, such as starting at a low ready rather than a required draw from a holster. If your firearm fits one of these divisions, you are halfway there.

What is required to shoot?

Aside from ear and eye protection competitors need only have a division legal gun, appropriate belt holster, ammunition, and a couple spare magazines to ensure timely runs. Shooters are encouraged to have at least five magazines (or five speedloaders in my case) to play. The event I attended ran from 10:00 AM to 2:30 PM so drinks and snacks would be a smart idea as well. I would also bring a fold up chair between shooting and spectating...unless I am ambushed to keep score like I was at this past match. (I say ambushed, but it actually helped a bit because I was forced to pay more attention to the shooting rather than daydream.)

What did I shoot?

As this is a revolver-centric blog, the odds that I shot a revolver are pretty high. The wheel gun pictured above is a Smith & Wesson 617, a stainless steel .22lr with a ten shot cylinder. This thing is a brick, but that six inch barrel sure helps with accuracy. Steel Challenge allows numerous modifications, so I changed the rebound spring from the factory weight to a 13lb Wolff. This lightened the trigger a tiny bit while maintaining reliability. I swapped the stock grips with a set of Hogue Big Butt grips to help balance out the weighty barrel.

I also added a Hogue Extended Cylinder Release because that is easier to open with my left thumb than the stock release. A buddy put a few coats of paint on the front sight (three white and three red) and there was good contrast between the front and rear sights. I picked up a Speed Beez 617 Competition loader (anodized race red) and ordered a loading block designed to hold five cylinders worth of ammo...which did not arrive in time, so I ended up loading by hand. Added a bulk box of Thunderbolts, which are incredibly dirty, and I was ready for the match. 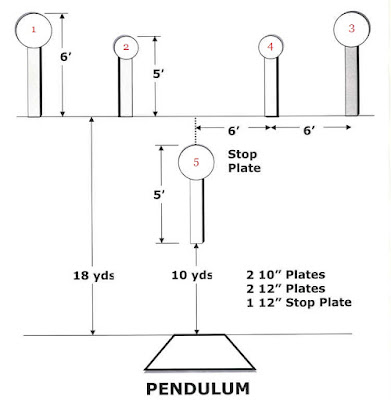 This was the first stage of my first Steel Challenge match! Normally this stage is three 12'' plate and two 10'' plates. Thankfully, the match director replaced the two 10'' plates with 12'' plates. Not only did I really appreciate this but so did the kids in my squad. All three of them shot plate 4 then plate 3. That seemed like a long transition back to the stop plate, so I changed shot from outside to inside. The best four of my five runs totaled 18.61 seconds. 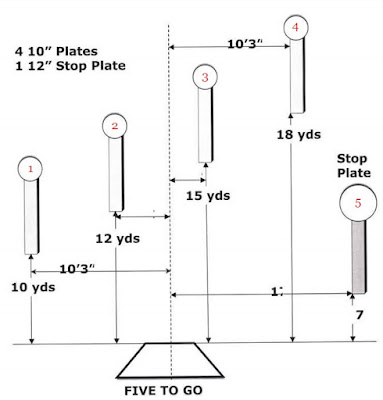 All of the 10'' plates were changed to 12'' plates which I assume is significantly easier than the normal format. Shooting from left to right seemed like the best idea, and as a lefty, I like to shoot targets starting on my strong side. The transitions were nice and short, but I got lazy on one of the strings and had a make up shot or two. The best four of my five runs totaled 15.76 seconds. 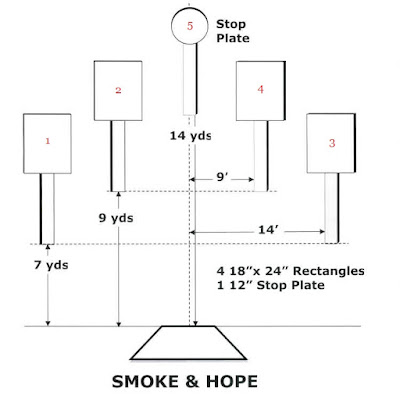 From my little knowledge of Steel Challenge, this stage is supposed to be the fastest because everything is big AND close. I figured if there was a stage to try and shoot fast, this is the one. Well, I can tell you that you can totally miss one of those big plates; I had to swing back for a make up shot. Plate 3 was the culprit in two of the five strings. The best four of my five runs totaled 12.78 seconds. 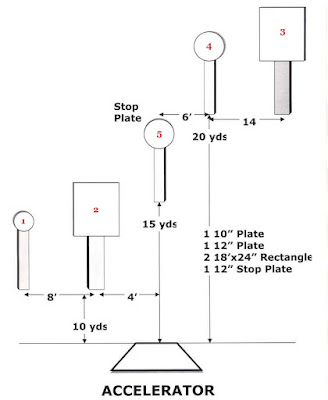 Again, the match director felt pity and replaced the 10" plate at 10 yards with a 12'' plate. I think all the changes were a really clever idea to draw more shooters to this match. I needed at least one make up shot on the first plate. I also had trouble with plate 4 on at least two of my runs. I didn't have many problems with the stop plate that day but took three shots on my final string. The best four of my five runs totaled 15.32 seconds. 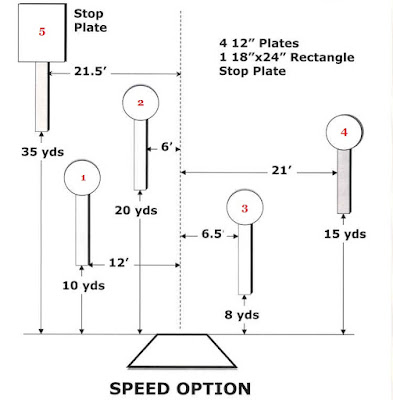 By stage five of the match, it was starting to get hot and I was starting to get hungry. The first four stages had been pretty good, and I would have been happy to stop there. This stage has the widest transition from plate 4 to the stop plate. Trying to speed up then stop abruptly wasn't super difficult but required some brainpower. At least it is a big rectangle. The best four of my five runs totaled 21.35 seconds. 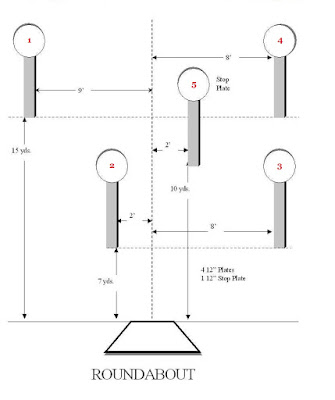 At stage six, I was just ready to be done. I actually took several make up shots after the transition from plate 2 to plate 3, but the transitions are short so it was still fun. I guess the heat was getting to me. The best four of my five runs totaled 21.85 seconds. This was definitely my worst stage. On top of that, once shooters finished their runs they began to peel off and head to lunch. The rest of us didn't really mind until the staff requested us to pick up all the stray brass, but we managed.

Overall, I had a great time and will be playing in at least two divisions at the next event. The most surprising aspect of my first match was the number of rimfire pistols and rifles present, particularly in my squad. I guess it shouldn't surprise me as I was also shooting in Rimfire Pistol Irons (RFPI). Of the twelve different guns competing, nine were rimfire! It wasn't just the kids shooting .22lr either. The oldest gentleman in the squad fielded both a Rimfire Rifle Optics (RFRO) entry and a Rimfire Pistol Optics (RFPO) entry.

I honestly can't believe that I waited this long to try Steel Challenge. After just one match, I am hooked and intend to shoot at least one match a month if possible. Like every shooting sport, the only complaint I have is the waiting between each string. The local match permits multiple entries and spacing them out might make the waiting time seem shorter. I will bring a Ruger 10/22 with a dot to shoot in RFRO because after all, I don't only shoot revolvers. I think this discipline is a great way to start new or non-shooters in competition. It's fun because its fast, and you receive immediate feedback with that satisfying "ting" on a hit.

Here is a link to the official Rule Book, which isn't really long or complicated, so you can start shooting too!

As always, please comment below if you have an suggestions for future posts or would like to share your experience on the current topic.
at June 28, 2017