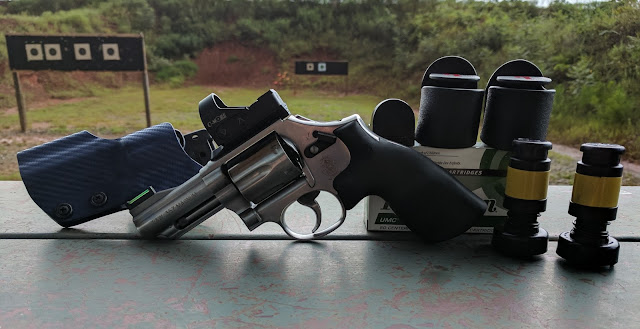 This was the first IDPA match I've shot with the Smith & Wesson Model 66 Optic. Not too long ago, I posted a review of a revolver that I feel would be ideal for a wheel gun in a Carry Optics division. If you haven't already read my previous posts regarding a Revolver in Carry Optics or the S&W 66 Carry Optics, please take a minute to read them.

The Match Director only chose to use four of the five bays at the club. Stages three and four used the same set up but were designed to be run in reverse. The same can be said for stages five and six. There was more strong/weak hand only in this match compared to usual club matches. I can say that the dot really helps with this type of shooting. 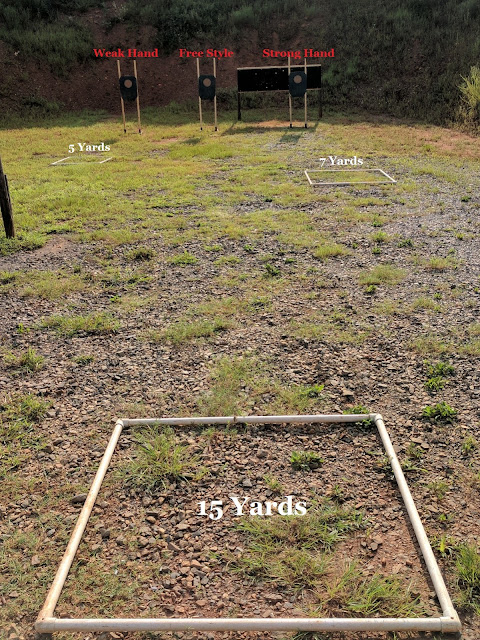 The first stage of the match was the standards stage. There was an option to advance from the 15 yard position or retreat from the 5 yard position. Most of the squad chose to advance. If I recall, the stage was limited, so I shot two at each position: free style, strong hand, and weak hand. I was down 10 due to hits just outside the target center. I thought it was pretty poor shooting until I heard down 20s and 30s. 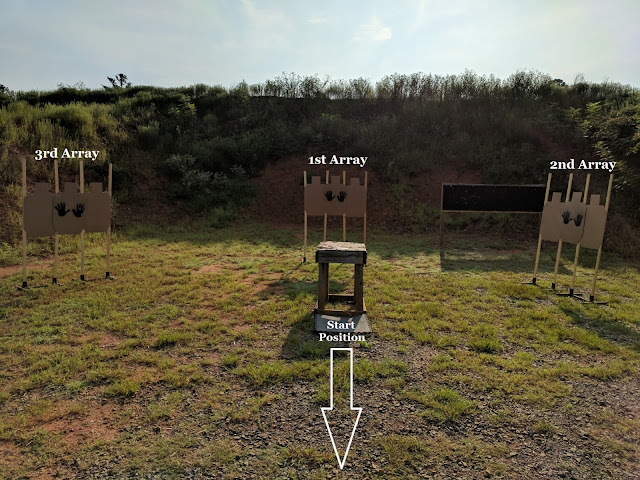 This stage required shooting on the retreat. Rather than the typical best two on paper, the match director wanted us to shoot two to the body and one to the head. This is commonly referred to as the Failure Drill. As the capacity of the 66 is only six rounds with only three reloads on my belt, there would be no time for make up shots. I stopped moving each time I reloaded while taking short steps on the retreat. A three on the second array, another down three, and a blown head-shot on the third array ruined the stage. Overall, pretty poor shooting with 11 points down. 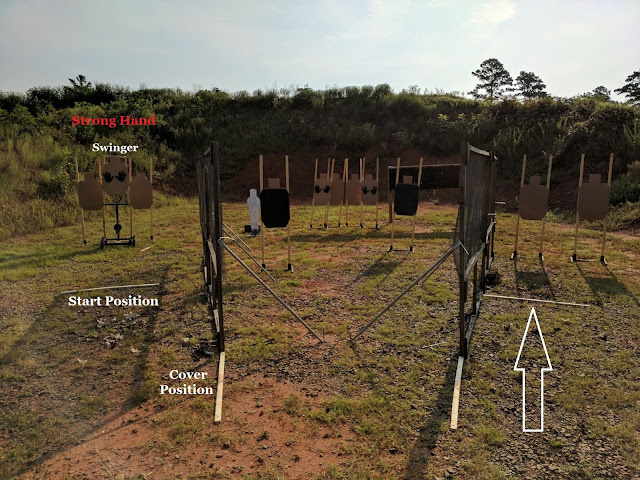 Stage three started with activating a swinger and engaging strong hand only: one to the body and one to the head. Thankfully, none of this was on the move. I took an extra head shot on both targets, taking care to avoid the swinger, and reloaded on the way to the cover position. The next array needed to be engaged as targets appeared and required a standing reload. One shot on each steel, two shots on each head, and three on both far targets. A final reload then three on both targets while advancing. I was only two points down on this stage. 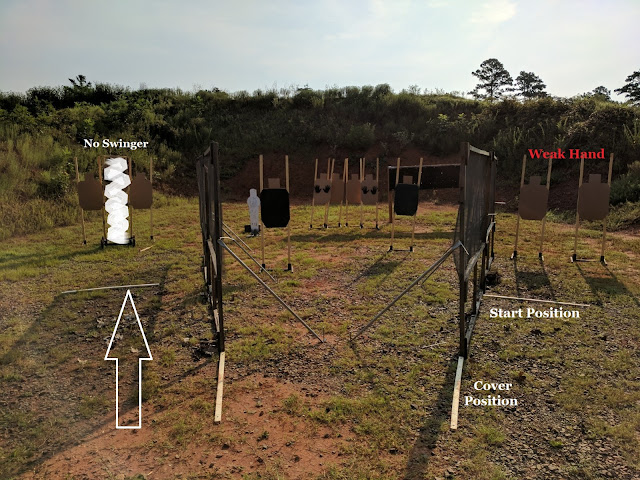 As a lefty, I prefer to move right to left across a stage. It is much easier to shoot around the strong side of a cover position. Stage four was the reverse of the previous stage with a few tweaks. The stage started on the retreat engaging weak hand only. I followed the same pattern of one shot on each steel, two shots on each head, and three on both far targets as I did before. The swinger was removed at the final position so no one accidentally hit the stand while advancing on the targets. I dropped an additional point but my overall time was twelve seconds faster than stage three. 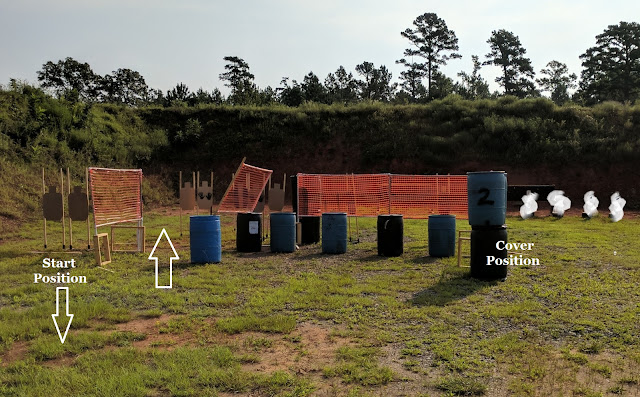 Stage five started with a retreat while shooting from retention. I fired three rounds on both papers, performed a reload, and rounded the corner. It was at that point that I earned a three second procedural for stopping on my first shot rather than shooting while advancing. I remembered that I needed move while shooting and continued down the "hallway" to finish the stage. I was only down one point on the stage. 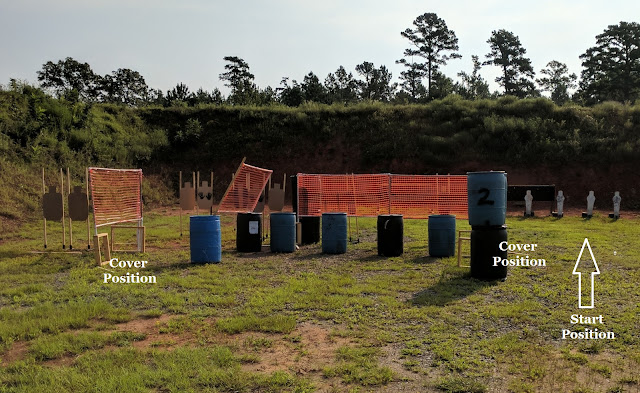 Stage six added four steel poppers that needed to be engaged before reaching the safety line or the first cover position. I took a makeup shot on a piece of steel so my whole reloading plan kind of fell to pieces. It really threw off my groove. My final reload used my third speed loader, something I try to avoid if possible, with only one target left to engage. I managed to finish the stage with only one point down. 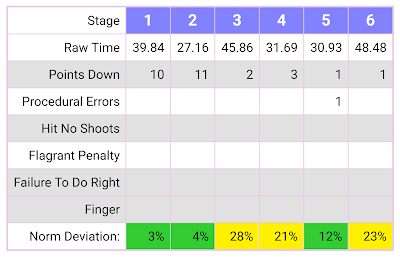 Here is the UberScoreMaster summary of my match. My final time was 254.96 seconds: 11th out of 21 shooters. As a point of interest, the overall winner's time was 165.05 seconds. Of course since I was shooting NFC/SPD, my rank doesn't really matter. I was hoping someone else would be shooting a pistol with a slide mounted optic. Maybe IDPA will add a Carry Optics Division to the rules down the road. Hopefully it includes wheel guns.

I really enjoyed shooting the Smith & Wesson 66 equipped with the CMore RTS2. At the end of October, I shot this revolver in USPSA Open against the race guns, but forgot to take stage photos. You can imagine how well that went, but it sure was a great day on the range! I am shooting another USPSA match with the S&W 66 Optic this weekend so I'll try to take some pictures of the stages for a post next month.

As always, if you have any suggestions for future posts or would like to share your experience on the current topic please post below!
at November 22, 2017