I feel it is important to note that this isn't the first Ruger LCR that I've owned. Right after I started shooting, I purchased a Talo Edition LCR .38 Special + P in OD Green. I absolutely hated it. It turned me off to revolvers for about a year. I know. A light weight snub nosed revolver may be the worst choice for a first revolver, but that is what I could afford at the time. Fast forward a few years and a couple wheel guns later to find that this Ruger LCR .357 is a regular companion when I'm out and about (about 33% of the time). This is a great little gun, loaded with features, that anyone with experience behind a revolver should look into.

The snub nosed revolver is a popular carry option due to the size, weight, simplicity, and reliability (we could debate this forever). Prior to this release, alloy frame revolvers were considered to be the carry option for many people. In 2009 Ruger introduced the Lightweight Compact Revolver (LCR) that incorporated a new polymer trigger housing. This design, coupled with a familiar monolithic alloy frame, steel cylinder, and barrel sleeve, reduced the weight of the wheel gun even more. The result? A 13.5 ounce wheel gun rated for .38 Special +P. The Ruger LCR .357 Magnum came shortly after offering additional power (and recoil) with a slight increase in weight to 17.1 ounces. That's pretty impressive.

Ruger also created a "patented friction reducing cam" system that smooths out the trigger pull and prevents stacking. The trigger pull feels lighter than it actually registers on the scale. A few other features, such as a pinned front sight and recoil absorbing stocks, all come standard from the factory. Options are nice. Ruger offers a variety of parts that other competitors did not. Let's looks at some of the parts I selected to get this revolver to fit my lifestyle!

One of the best features of revolvers is the variety of stocks shapes and materials that a frame can accept. The Ruger LCR is no exception and several companies make stocks for the intended purpose of the gun. Ruger partnered with Hogue to create the Tamer stock that feature a recoil pad along the back strap to reduce the felt recoil of the little revolver. This comes standard and is relatively comfortable compared to wood or G10 stocks, I just hate finger grooves.

With the release of the Ruger LCRx 3 inch, Hogue produced  a longer stock without grooves. While these larger stocks are the most comfortable for shooting, they print unless I am wearing larger fitting clothing. I finally decided on the Hogue Bantam Boot grips for better concealment and the lack of finger grooves ensuring a better fit in my hands. These stocks still feature the Tamer recoil pad on the back strap. They are good enough for me.

Perhaps my favorite feature of this little snubbie is the pinned front sight. This model come from the factory with a serrated black front sight. I had a hard time seeing the sight at the counter. Thankfully, Ruger collaborated with a couple companies to offer both fiber optic and night sight options for those who have a hard time with black on black sights.

I ordered an XS front sight as soon as I made it home with my new prize. Once the sight was installed by my local gunsmith, I took it too the range for some shooting. The LCR hits point of aim/point of impact with most of the ammo I've tested inside of 10 yards. As expected longer shots require a six o'clock hold. I've only shot out to 25 yards with the LCR.

Selecting the carry round for the LCR was actually quite the challenge. There are dozens of defensive ammunition options for the snub nosed revolver. I tend to lean toward .38 Special + P, rather than .357 Magnum loads, in my revolvers. I just don't like the blast that magnums produce. I settled on Speer's Gold Dot Short Barrel 135 grain 38 Special + P ammo based on ballistics tests I've seen and the overall shooting characteristics of the round. Out of the LCR, recoil is manageable and the rounds shoot POA/POI with my front sight.

Testing accuracy with a handgun is largely based on the shooter's ability. I've only been shooting revolvers with regularity for about two years and a half years but I consider myself, an average shooter. I shoot the Hardwired Tactical Shooting Snub Super Test regularly with the short barreled revolvers I own. A passing score is a 135/150. The drill is straightforward as follows:

The target above is from a range session last spring. I managed to run out of the B-8 targets during my most recent session, so I don't have another target to post. I shot this drill with standard .38 special rather than the +P offerings. I dropped a few points shooting quickly with one hand, but I passed. I need to run this drill with +Ps soon.

I forget how much a little snubbie can recoil after shooting steel frame revolvers all day. Thankfully, the additional weight of the LCR .357 assists in recoil management. The .38 + Ps are a handful, but I am able to control them during strings of fire. I don't think I will ever shoot this with .357 magnums. I feel like the recoil, noise, and muzzle blast would reduce my proficiency with this little gun. I'll stick with +Ps.

I've also found that the shorter extractor rod doesn't always extract the cases with my preferred reload. As a lefty, I typically transition the revolver to my right hand and use my index finger to push the extractor rod. This usually results in at least one stuck case with the LCR. Instead, I have trained myself to use the universal reload. The revolver transitions to my left hand with fingers through the frame and the extractor rod receives a firm strike with the palm of my right hand. My right hand then retrieves a loading device and I transition the revolver back to my left hand for a firing grip. I prefer my left handed technique, but this is fine. 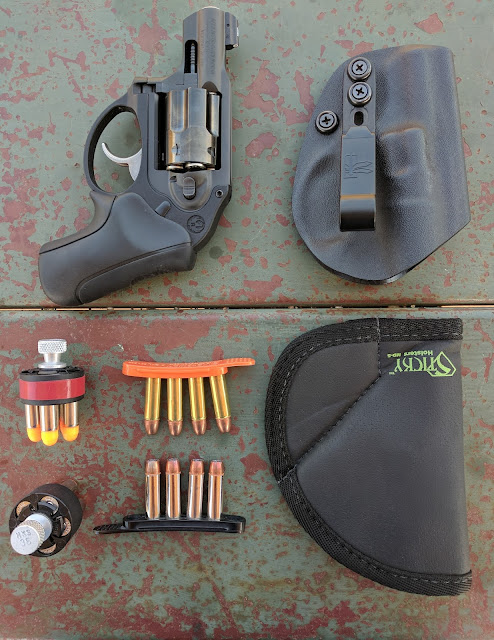 I mentioned that the Ruger LCR is one of my two regular concealed carry options. Although I prefer shooting this little revolver with the extended grip, that stock doesn't always conceal well on my person. I went with one of the smallest grip options, the Bantam Boot grips. This is an incredibly concealable package for appendix carry, inside the waistband carry, pocket carry, and coat pocket carry.

The kydex holster offers full coverage of the revolver and is ambidextrous with a reversal of the screws. It came with a soft loop strut, but I prefer the clips made by G-Code Holsters. It pushes the butt of the stock closer into your body so it prints slightly less. For pocket carry, I really like the Sticky Holster. It stays in the pocket when I draw the revolver. It is actually designed to be placed between bare skin and a waistband, but I like more retention for belt carry.

After five shots the LCR is empty. I was hoping a Safariland Comp 1 designed for a J-frame would function, but it just doesn't fit. HKS speed loaders are widely available and relatively inexpensive. Although not a perfect fit, this speed loader works just fine. I'd like to try a 5 Star Fireams J2 and matching Kydex Speed Loader Carrier,  but I haven't ordered any yet. These typically ride in my right hand front pocket and it feels like a small rock. I also carry a speed strip in the small pocket on the right side of my jeans.

The Ruger LCR is quite the little revolver. The amount of features for the price makes it a competitive option for those looking for a concealed handgun. This addition to the market challenged Smith & Wesson's dominance in the small concealable revolver market. Ruger has continuously added to the LCR line by offering several calibers, different barrel lengths, and an model with an external hammer. I think Ruger really listens to potential customers when they offer new models of this fantastic platform.

When I saw the Ruger LCR .357 sitting in the used cabinet for a great price, I bought it then and there. The ability to change the front sight and the recoil absorbing rugger stocks sold me the LCR. The 17.1 ounce weight .357 model also helps to soak up a bit more recoil than the standard LCR and is totally worth the four ounces. I've never fired a .357 through it and don't intend to, but the option is always there should I decide I need it. This model is a winner!

As always, if you have any suggestions for future posts or would like to share your experience on the current topic please post below!
at December 20, 2017