For tinkerers like myself, upgrading firearms to increase performance is always exciting. As I pointed out in my first post regarding the Smith & Wesson 929, I wasn't particularly thrilled with the performance out of the box. The largest issue was the outrageous number of failures to fire. After further examination, I believe a loose strain screw was the culprit for that particular issue. Just in case my diagnosis was incorrect, I sent the 929 and a box full of parts to my gunsmith. A few weeks later, I picked it up after the club's monthly Steel Challenge match. Several shooters wanted to give it a try and everyone was pretty impressed with the results. Here is the rundown of the parts I selected!


The ignition issues needed to be corrected as soon as possible. I searched online forums for a solution and came back with a couple potential fixes. The first was to swap to the mainspring in case the factory spring was out of spec. I purchased a Type 1 Wolff mainspring which has the same power the normal part. The other suggestion involved swapping the factory firing pin for an aftermarket pin and reduced power spring.

Apex Tactical's XP Firing Pin Kit was the most recommended part. The replacement is slightly longer than the factory pin and includes a reduced power firing pin spring. These two parts, working in tandem, increase the chances for positive ignition. Some of you might be wondering why I didn't select the Competition Firing Pin Kit offered by Apex. The S&W 929 was designed from the ground up as a competition revolver. The competition kit is designed for hand loaded ammunition and all of mine is factory. I may start reloading one day, but that is probably a few years down the road.


The next part I upgraded was the hammer. Nearly every revolver I've encountered that was built for competition sported a bobbed hammer. When I first started shooting revolvers, I never had issues with the hammer spur biting my hand. I attended a revolver-centric class where all the instructors reinforced the idea that double action revolvers should always be fired in double action. After learning how to properly grip a double action revolver, I found myself occasionally getting poked by the hammer.

The hammer bite is was the reason I asked Steve to install Apex Tactical's Evolution IV K/L-frame hammer kit on my Smith and Wesson 66. As a bonus it also looks cool. After shooting the Model 66 with a bobbed hammer, I decided that a competition revolver needs to have a bobbed hammer. I purchased Apex's Evolution IV N-frame hammer kit and asked my gunsmith fit the new hammer. The kit comes with two trigger return springs, light and very light, and both times the heavier spring was selected to reset the trigger faster. The trigger pull is currently sitting right around 8 pounds and Steve said I can go lighter if I start hand loading. 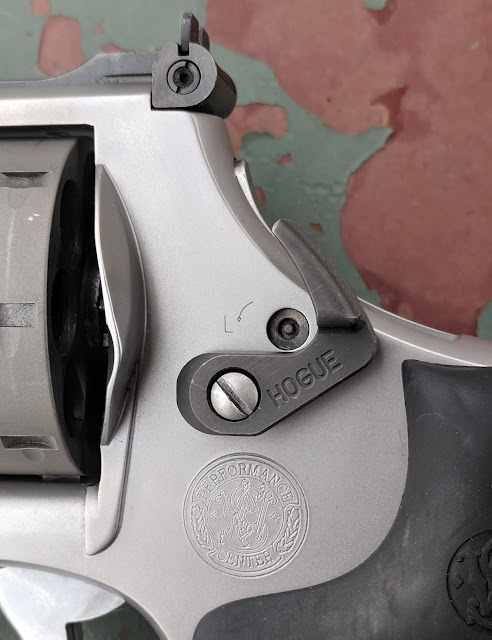 Smith and Wesson's factory cylinder release latch is relatively easy to operate, but it certainly isn't the fastest way to open the cylinder. Another upgrade I chose is the Hogue Short Cylinder Release. This design is beneficial as it changes the angle required for of your thumb to press the latch while shortening the distance the thumb travels to unlock the pistol. It also comes in a "Long" version. The geometry is especially useful for my left handed reload because my left thumb can actuate the release on the way to my reload. This part moves between my a couple of wheel guns because this part isn't cheap, I think the price just went up by $10, but it is super effective. Other companies, such as S&W and TK Custom, make similar parts and I'll probably try a few of them soon. 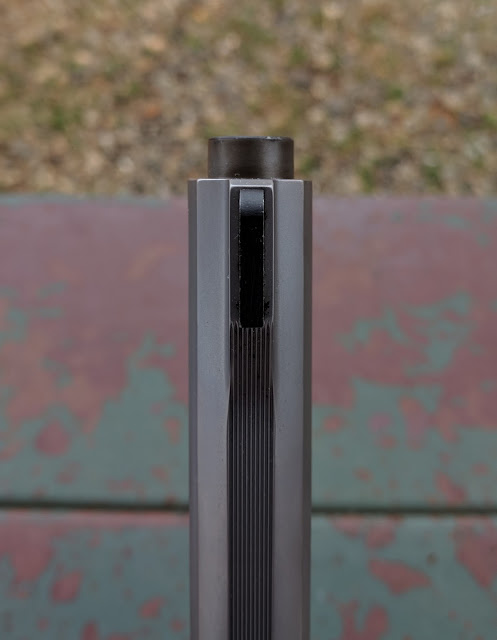 This isn't really an upgrade, but it is a change. The 929 ships with two removable muzzle devices. One of the devices is a single port compensator for open division guns and the other is a muzzle cover to protect the crown. This is really neat, but the down side is how dirty this makes the gun. There is a huge amount of carbon that builds up around the muzzle between the barrel and the device. It is incredibly dirty after a handful of moon clips, so I decided to just leave that part off. If I ever shoot open with this revolver, I'll throw the comp on and have a good time. I'll do my best not to mess up the crown.


Another issue I experienced with the 929 out of the box was chasing the zero. I've read that Smith and Wesson isn't actually using 9mm barrels and that is negatively impacting the accuracy of the revolver. I'm not so sure that is true. I'm 90 percent certain that my previous failure was my fault. I just couldn't settle on a zero during before installing the upgraded parts.

On my first trip to the range with the upgraded revolver, I shot a few groups at 25 yards until I was happy with my zero. The very next thing I did was shoot the Hardwired Tactical Revolver Super Test. The drill uses an NRA B8 target and a passing score is a 162/180:

I think the drill went well. I shot a 172/180 within the time limits. It seems like I can hit everything except the X sometimes, but I'm still happy with my performance. If you have never tried this drill before do it cold and see where you stand!

There you have it! I selected the parts to solve problems that I encountered shooting the S&W 929 out of the box. You may have noticed that I have not addressed the sights or the stocks. I may change these parts if I feel it will make the revolver better than it already is. I really like fiber optic sights and Hogue big butt grips, but I think I'll wait a bit before swapping them out. If the weather is nice, I'll be shooting this gun at USPSA in March. I'm excited to try it out!

As always, if you have any suggestions for future posts or would like to share your experience on the current topic please post below!
at March 07, 2018