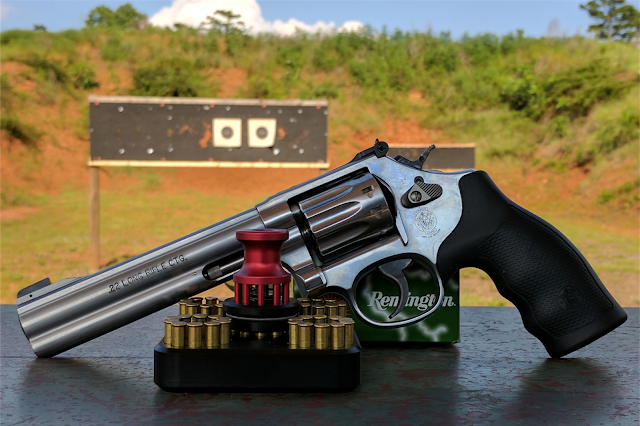 
The Smith & Wesson 617 is a stainless steel ten shot K frame modeled on the venerable Smith & Wesson 17. The S&W Model 17, previously known as the K22 Target Masterpiece, has a blued finish and six shot cylinder. These models are designed specifically for target shooting but also make a budget friendly trainer. This line of .22 revolvers feature identical controls and very similar weights and practicing with rim-fire is significantly cheaper than center-fire.

The Smith & Wesson 617 is a neat revolver. With an overall length of nearly twelve inches and a weight of approximately 44 ounces, this model is large! In all honesty, the balance feels a bit off with the lightweight factory grips; it feels front heavy. This is one of the reasons I switched the stocks for the Steel Challenge match. Smith uses a Patridge front sight on this model, and I have not found any replacement sights low enough to replace it. A bit of model paint works just fine. The trigger is standard Smith & Wesson: about a twelve pound double action pull and a four pound single action. A trigger job really helps to make this a performing target revolver.

Speed Beez is an innovative company that manufactures speedloaders for a wide variety of models. The aluminum handle for the 617 even comes in three different colors: red, pink, and their signature gold. Speed Beez also produces matching loading blocks for their speedloaders. This allows you to purchase one loader and a block rather than several loaders. This is great if you are shooting a discipline that does not require reloads on the clock. Perfect for something like Steel Challenge! Here is the link to their page dedicated to this revolver and loading accessories: 617 S&W 10 Shot 22LR Speedloaders. If you can't find the a loader for your revolver, it's possible that they make one. 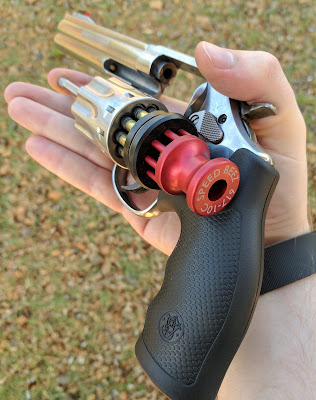 The Speed Beez 617 Speedloader is a very interesting design. From what I understand, this design is similar to an older loader produced by Dade Machine Screw Products for a short time. These loaders were constructed using a plastic base with plastic button-like release. A small spring around the outside of the base secured the cartridges by the rims. The rear button was pressed to release the ammunition.

In my opinion, Speed Beez has improved this design by using stronger materials. Similar to the Dade, a small spring runs around the outside of the loader which holds the rounds in place by the rim. The anodized aluminum handle has been milled with ten posts that match the holes cut in the speedloader base. The base is machined in the ten round pattern of the cylinder. These posts contact the center of the rimfire round, rather than the rim, which prevents ignition during swift reloads. After the rounds have been pushed into the cylinder by the posts, a spring beneath the handle returns the handle to its normal position. The handle is just big enough to comfortably manipulate. 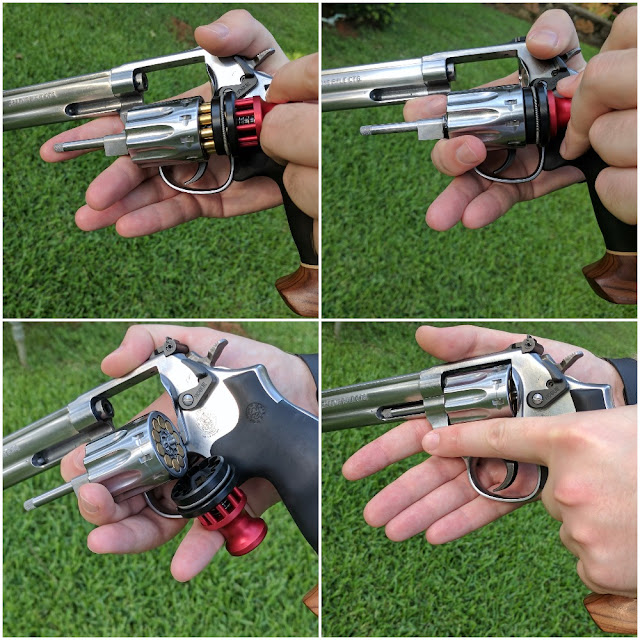 Reloading the 617 is actually kind of tricky. Lining up ten little cartridges with ten holes doesn't always happen on the first try. The exterior spring does not always hold the rounds tightly enough to perfectly match the cylinder pattern. Luckily, it is close enough and the rounds go in with a bit of fidgeting. I am still using my left handed reload; however, a support hand reload should work just fine. The lefty and the support are essentially the same except for where the right hand is holding the revolver (frame versus grip). I have not attempted the Universal or FBI reload with this loader, but I assume it also works just fine.

Testing accuracy with a handgun is largely based on the shooter's ability. I've only been shooting revolvers with regularity for about two years now but I consider myself, an average shooter. Rather than attempting the Hardwired Tactical Shooting Revolver Super Test, I decided that a target gun needs a more traditional accuracy test. I hate the idea of shooting from a bag on a bench. Instead, all shots were taken while standing using two hands. I came up with something simple: ten rounds from ten yards in six seconds.

Here are the results:


For the purpose of this review, I returned the 617 to its stock configuration with the exception of the trigger return spring. I prefer a lighter trigger, so the 13lb Wolff trigger return spring was left in place. Although I shot my first Steel Challenge with the upgrades pictured above, the revolver is a fine shooter as it comes from the factory. So why bother with the aftermarket parts? Well, these parts actually improve the handling of this long barreled wheel gun. They also make the revolver look kinda cool, so there's that.

The upgrades definitely serve a purpose other than looking cool. The Hogue Big Butt stock is beneficial for two reasons. First, the rubber grips at a bit more comfort (and I hate finger grooves) and second, the wood butt provides a bit more weight than the OEM grips which helps to balance out the heavy barrel. The other upgrade, a Hogue Extended Cylinder release, makes opening the cylinder with my left thumb (remember the left handed reload?) significantly easier. Since I am not reloading on the clock in Steel Challenge, it might be a little unnecessary. As a trainer for the center-fire revolvers that I will load on the clock, it helps to have consistency. 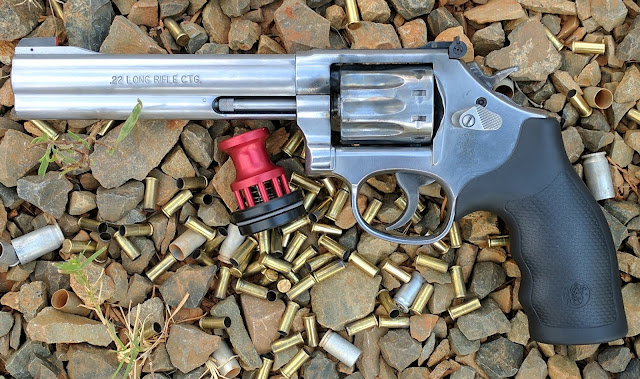 Shooting the 617 is a wonderful experience. The heft of the revolver soaks up most of the recoil the the .22lr generates. Aside from a great competition gun, this ten shooter can serve as a great all around trainer. Especially in the case of youth and elderly shooters, this revolver is a great way to build/keep up skills while reducing the number of center-fire rounds sent down range. Should I have any children, my step father's K22 will be used to teach proper marksmanship. Once they have become familiar with the double action revolver, they can move on to other pistols. I definitely recommend it.

I have another Steel Challenge match this weekend, so I will shoot the 617 as it is currently equipped. I am not particularly thrilled with the shape of the trigger and would like to remove the hammer spur. The match director is a very competent gunsmith who is currently working on another of K frame, so I will try to leave it with him to work his magic. These changes are by no means necessary, and the stock 617 is a great revolver in it's own right. If you are in the market for a higher end .22lr revolver, this is the way to go.

As always, please comment below if you have an suggestions for future posts or would like to share your experience on the current topic.
at July 05, 2017