A Gift from Her Grandfather: the Ruger Bisley 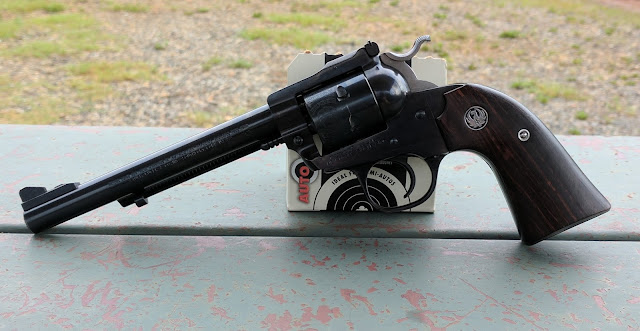 This particular revolver is a Ruger Bisley chambered in .22lr and belongs to my significant other. Her grandfather purchased this gun prior to a medical diagnosis which has left him unable to shoot. On a recent visit, he decided to gift this lovely little revolver to her. I'm not sure if he shot it much, if at all. She has little interest in shooting the gun, but doesn't mind if I take it out from time to time.


In last week's post, I showcased two different single action revolvers. Both happened to be produced by Ruger and I believe their current production revolvers are updated versions of the classic single action army design. These modern single action revolvers feature enhanced sights and updated safety features. For example, the transfer bar system allows the revolver to be loaded to full capacity without fear of accidental discharge if dropped. This is a significant improvement over the original design which required the hammer to be placed on an empty chamber.

After visiting www.Ruger.com, I saw that this model was not currently in production. The Ruger Single Six appears to be very similar, with the exception of the extended grip frame and engraved cylinder. The 6 1/2 inch barrel balances nicely with the slightly longer grip. I also really like the wooden stocks. Although a bit of wood checkering would have been a nice touch, it is not entirely necessary considering small caliber. The features found on this model make this a great package. 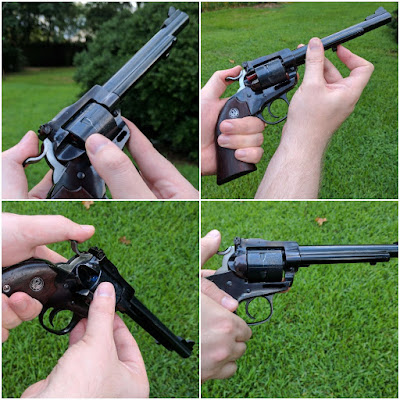 The task of loading and unloading a single action revolver isn't overly complicated, but it is certainly a process. Most single action revolvers of this design possess a loading gate on the right side of the frame. This gate allows access to the cylinder's chambers. Older black powder designs previously required the cylinder to be loaded from the front or even removed from the frame entirely. The gate must be opened to allow the cylinder to turn freely, but unlike older designs that require bringing the hammer to half-cock, the updated modern single action's hammer can remain safely in the down position.

To eject spent cases, the barrel should be angled vertically which allows gravity to aid in extraction. While the left hand holds the gun and rotates the cylinders, the right hand sharply presses the ejector once  the chambers are aligned with the ejector. The rhythm takes practice, but they say practice makes perfect. After punching out the empties the barrel is rotated downward to allow gravity to help feed the rounds into each chamber. Again, the left hand rotates the cylinder while the right hand loads fresh cartridges. Once the chambers are filled, the loading gate can be closed and it is ready to fire.


A single action revolver chambered in .22lr might be one of the best shooting wheel guns available. The combination of low recoil with a crisp trigger makes for good shooting if you take your time. Testing accuracy with a handgun is largely based on the shooter's ability. I've only been shooting revolvers with regularity for about two years now but I consider myself, an average shooter. I really hate shooting groups off the bench, so instead I shot the following off hand at a moderate pace:

I know, I know. The target pictured above may not be fantastic marksmanship. It doesn't always have to be perfect. Sometimes just shooting and enjoying yourself is the best use of time on the range. After a day working with a newly completed project, it was nice to shoot just for fun. 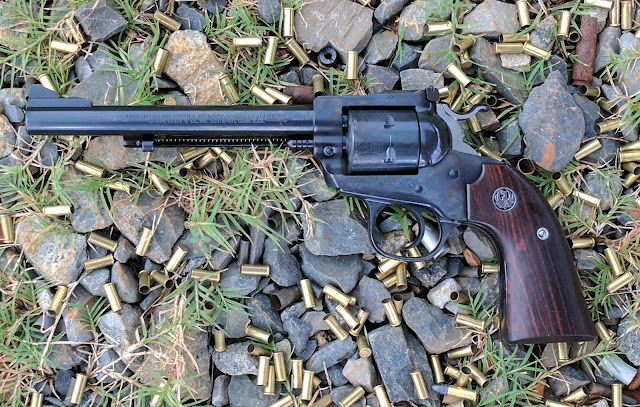 The Ruger Bisley chambered in .22lr is a great rimfire revolver. I really enjoy the aesthetics and ergonomics of this firearm. It is more than comfortable to shoot all day and the caliber produces very light recoil, especially with the added weight of the barrel. As I've mentioned in previous posts, a small bore revolver like this one is perfect for training new shooters, plinking, or and hunting very tiny game.

Even though my significant other doesn't care for revolvers, this piece is sentimental to her because it is a gift from her grandfather. Rugers have a reputation of quality construction that will outlast the original owners as long as they are maintained. With a bit of luck, a quality revolver like this can last for generations.

If you are in the hunt for a quality rimfire revolver, this one is a winner!

As always, if you have any suggestions for future posts or would like to share your experience on the current topic please post below!
at August 16, 2017