What is a single action?


When most people think of single action revolvers they probably think of the Wild West and the Colt Single Action Army produced starting in 1873. I could (and will) dedicate an entire post to the SAA, but this post is less about a particular brand of firearm and more about the features of a modernized single action.

For those unfamiliar with the terminology, "single action" refers to the trigger performing one action when it is pulled. Unlike a double action trigger, which both cocks then fires the revolver, a single action simply releases the hammer. That is an over simplification of the design, but most readers don't care about all the mechanical specifics.

Below, I briefly discuss two examples of this modern single action which both happen to be produced by Ruger. I don't personally own either of these fine pieces, but I was happy to use them as they are both quality single action revolvers. Lets take a look at these two Rugers! 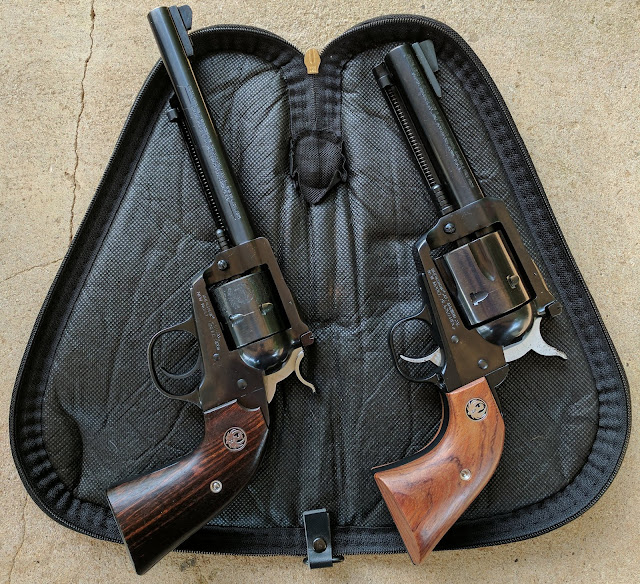 In addition to the wide number of Single Action Army clones produced by Italian companies such as Uberti, several companies now produce modernized versions of the classic single action design. I would wager the best are produced by Ruger. Colt's original design was not drop safe and the firing pin makes contact with the primer when the hammer is in the decocked position. This means that the hammer must rest on an empty chamber to be safe. Ruger developed a transfer bar safety for the single action to make the firearm drop safe which permitted loading all of the cylinders.

That company also made additional internal changes. The springs were updated from a leaf spring to a coil spring which tend to be a bit more robust. Another updated feature present on Ruger's modern single actions is manipulation of the loading gate without requiring the hammer to be half cocked like the single action army. Decocking a loaded firearm has additional risk, especially if the revolver has light trigger.

Aside from the new internal parts, many modern single actions now come equipped with more visible front sights and adjustable rear sights. Don't get me wrong, the fixed sights of the 1873 are still very popular on single actions replicas. If given the choice, I wager that many shooters would select Ruger's improved modern single action over the original designed by Colt.

What purpose do these revolvers serve? Well, consider that nearly everything a modern double action revolver can do, a single action did it first. This design can certainly fill a defensive role if needed, but may be better suited for plinking, training, and even hunting! 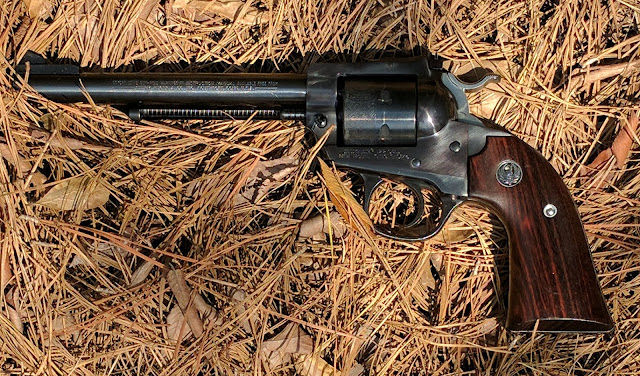 This Ruger Bisley belongs to my significant other and was a present from her grandfather. If you recall from previous posts, she doesn't really enjoy revolvers so it largely sits in the safe. On the other hand, I love visiting the range and shooting clays at twenty five yards. It is incredibly fun!

This model is chambered in .22lr, is equipped with a six and a half inch barrel, and has a six round capacity. The most striking characteristic is the long wood grip famously debuted by Colt in 1894 at the Bisley Shooting Range. I honestly prefer this frame to the standard single action army frame for smaller calibers, because my pinky rides comfortably on the frame.

As the Bisley is chambered in .22lr, recoil is very light. This is an excellent revolver for an afternoon of plinking. Clays, cans, and other makeshift targets should be easy pickings for this little revolver. While you can easily fire several boxes of .22lr during the course of an afternoon, the only thing that may slow you down is reloading after every six shots.

Another important role this modern single action can serve as is a trainer for new shooters, particularly kids! The large sights and light trigger of this wheel gun make teaching fun and easy. I hope to teach many friends, young and old, to shoot with this Ruger...assuming she lets me take it to the range that much. 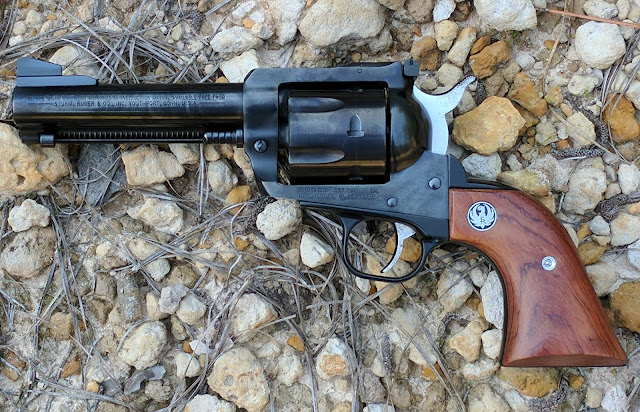 This Ruger New Model Blackhawk belongs to Mr. B. You might recall Mr. B from the post Infrequent Shooters Reviewing Revolvers. This is the only revolver he owns and it largely remains in his safe. When I received the revolver on loan from Mr. B the rear sight blade as actually chipped. I was able to replace the entire rear sight for less than fifteen dollars and fifteen minutes of my time.

This model is chambered in .357 Magnum and has a four and three quarter inch barrel. Zeroing the pistol at twenty five yards took a few rounds of .357 mag, but it shoots groups just fine. Shooting .38 Specials is much more comfortable, even if the rounds impact a bit low with the current zero.

I mentioned that I prefer a shorter grip on center fire single actions and there is actually a good reason for that. The design of the frame allows the pistol to "roll" in the hand slightly which reduces the felt recoil. This is particularly useful when shooting high pressure rounds, like the .357 mag, that have a significant recoil impulse.


The modern single action revolver is an incredibly useful firearm. Whether used for training, plinking, or hunting, this design excels. The action is smooth and light which lends to accuracy and fun because hitting your target is better than missing it. I have not yet had the pleasure of shooting Ruger Super Blackhawk chambered in .44 Magnum (let alone .454 Casull), but I would guess that model is also quite effective for hunting or back country defense.