This is not my first USPSA match with a revolver. Last November, I shot my three inch Smith & Wesson Model 66 equipped with a Cmore RTS2 red dot and six Safariland speed loaders...in Open Division...against race ready 2011s. It went about as well as you would imagine, but I enjoyed every minute! That post remains my most popular to date. On to today's post.

I visited the range twice with this rig before the match and did a bit of draw, dry-fire, and reloading practice at home to prepare. For those curious about the revolver I used at this match, I actually have two posts detailing the upgrades and the racing gear I selected for the Smith & Wesson 929. Give them a quick read If you'd like. There were six stages to shoot after we finished setting up. Here is my breakdown of the match!

This was the second to last stage that my squad shot at this match. There were fourteen paper targets and two poppers: thirty two shots minimum. This was a loaded table start. Targets T1 - T4 were engaged from the seated position. I loaded on the move and stopped before I passed the leading edge of T5. I chose to shoot S1 and S2 before engaging T5, T6, and T7.

After a quick step to the right while reloading, I addressed T8 to my left and moved toward T9 behind the barrel. With four rounds left in the revolver, I pivoted and shot T10 and T11. Another side step while reloading and I engaged the finally three targets T12 through T14. I think my plan for this stage went well. I always try to reload on the move, especially if I am going to need a full moon clip for the next array. I finished in 35.19 seconds (27 As, 2 Cs, and 1 D) with a hit factor of 4.0352.

This was the final stage of my match. Being a lefty is usually challenging, but occasionally it pays off. Several of the right handed shooters came very close to being disqualified for breaking the 180. I avoided this danger because the muzzle is always a bit further in front of me when moving toward my strong side. I reloaded after engaging each array. Three reloads on the clock for such a short stage isn't ideal, but with an eight shot capacity, they had to happen. I finished in 15.45 seconds (18 As) with a hit factor of 5.8252. 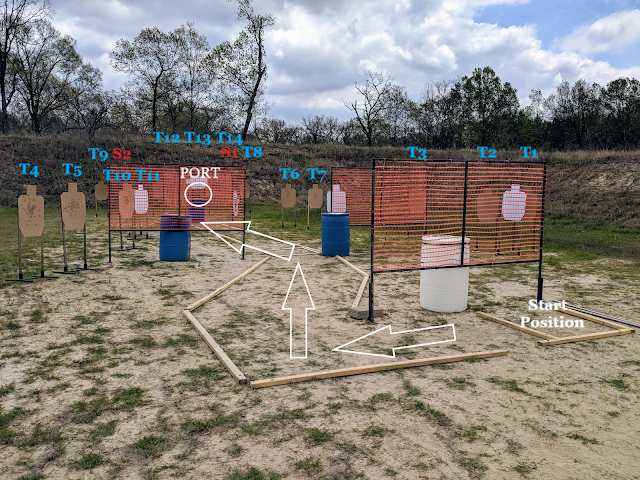 From what I understand, this stage is a classifier know as "On The Upper Pad II." This is pretty straight forward. The steel poppers must be engaged withing the box for safety and T3 through T5 must be shot from the port. Some shooters engaged the S1 and S2, left the box, and took T1 and T2 wile advancing.

The squad actually had a discussion regarding which target array to engage rights. The question at hand was, "Which side do you shoot first: the side you draw from or the opposite?" I've always engaged the targets on my holster side, in theory because there is less time to the target, but many shooters draw then reach across their bodies and work their way back to the holster side.

At the buzzer, I shot T1 and S1, transitioned to the right to take S2 and T2 from the box. This way, the revolver was on the right side of my body for my reload. It made sense in my head. I reloaded on the move to the port and shot T3, T4, and T5 through the port as required. This stage went great! I was particularly pleased that the reload was completed before I reached the port. I finished in 11.84 seconds (11 As and 1 C) with a hit factor of 4.8986. 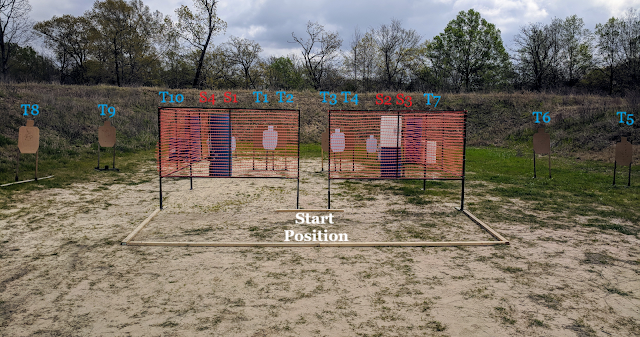 My squad started at this stage. For me, the first stage is always a little rough. A slow draw, a missed shot, a bobbled reload. Well, except for the slow draw, this stage went fine. There were four pieces of steel. S3 and S4 both activated swingers. I decided to work from the center position, then move to the right position, and finish at the left position. At the buzzer, I engaged S1, followed by T1 through T3. With my final shot I knocked down S2. I reloaded and hit S3 starting the swinger, before engaging T4 and S4 to start the other swinger.

At the right position, I took T5 and T6 before a flat-footed reload. With a full moon clip in the revolver, I took two shots at T7 when it paused momentarily. I probably should have reloaded, but with six rounds in the cylinder, I figured I could finish the stage. I ran back across the stage and engaged T8 through T10. I think this was the right decision. I finished in 39.79 seconds (18 As, 3 Cs, and 1 D) with a hit factor of 2.5132. 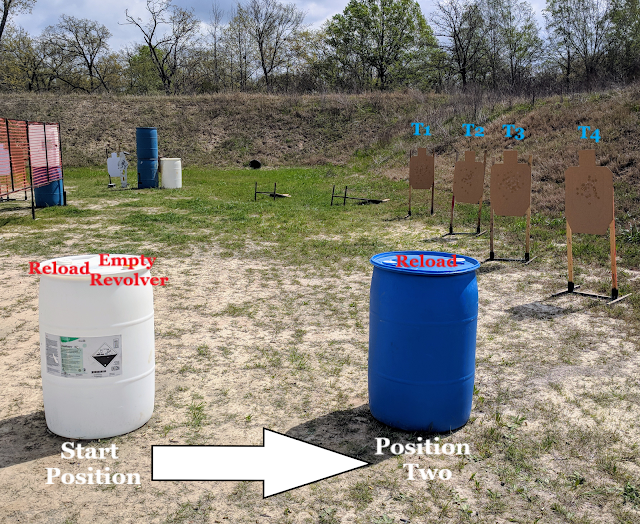 Our second stage of the match was an unloaded start. These are always a little challenging for me because of my left handed loading technique. I need both hands to open the revolver, so I can't immediately reach for my moon clip. This adds time After I retrieved the revolver, I struggled with the cylinder latch before finally loading and engaging T1 through T4.

I side stepped toward Position Two while reloading. I fumbled with the moon clip, failing to align the chambers on the cylinder. By the time I managed  to get loaded, I felt pressed for time and shot a pair of Cs and a D. I finished in 16.66 seconds (12 As, 3 Cs, and 1 D) with a hit factor of 4.2017. Another shooter realized the rules did not specifically state that shooters could not move toward Position Two while shooting. I think he won that stage.

This was a great first match with the S&W 929! My overall ranking was 23rd out of 28 shooters. Not great, but I still had a great time. Unfortunately, I was the only shooter in the Revolver Division. Hopefully there will be more revolver shooters at future matches. I've been chatting with people here and there an many of them own revolvers. Hopefully more wheel guns will start popping up at my local matches!

Quick side note: There were a few folks shooting Production, Carry Optics, and Open, but pretty much everyone was shooting Limited. This seems to be the most popular division in my area. The real surprise was the number of Pistol Caliber Carbine shooters. That division has taken off at this club! I even convinced a friend to come shoot the match with me and he placed 13th with his new Kel Tec Sub 2000. Maybe I'll work on a build down the road.

As always, if you have any suggestions for future posts or would like to share your experience on the current topic please post below!
at April 17, 2018