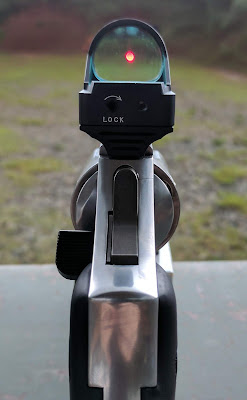 Back in August 2017, I discussed the topic of setting up a revolver for a Carry Optics Division (CO) in IDPA. For those unfamiliar with that division, it is a division that permits the use of red dot optic instead of/or in addition to iron sights. In my post A Revolver in Carry Optics?, I discussed how to set up a revolver for an IDPA Carry Optics. I based the revolver on several assumptions I made about a provisional division, assumptions that turned out to be wrong.

In order to fit the "theme" of the carry optics division, I selected a Smith & Wesson Model 66-6 with a 3.25 inch barrel. Why? Well it's not too big, but not to small. I've discussed my partiality for three inched revolvers in the past. I think that might be the perfect length barrel. In my post Model 66: Carry Optics Ready, I laid out the parts, the optic, and other gear required for the "new division" as I envisioned it at the time.

That brings us to today's post. This is my final match with the Model 66 Optic in IDPA. Below, you'll find the normal recap of each stage but instead of a picture, there is a video! Revolvers Only has started a YouTube channel! There you will find complete match videos, individual stages, and hopefully reviews of guns and related gear! The complete match video is down in the Conclusions section, if you prefer that format. Now, onto the match!

This stage was midway through my squad's match. This was a seated start, but once the timer went off targets could be engaged while standing. The barrel was on the right side of the chair, which me and another lefty were a bit concerned about, but the Match Director said to "reach the gun safely" so I picked it up as I stood. Both reloads were smooth, so I guess that practice is paying off! As a lefty, I like moving from right to left on a stage. It made shooting around those corners a bit easier! I finished the stage one (1) point down in 33.20 seconds.

Stage two was set up in every bay all three squads took care of this first. The stage was limited, with guns were downloaded to five rounds, a mandatory reload, followed by five more rounds. After my third shot, I ran into a bit of a problem. Another light strike. I tried to keep my composure as a furiously pulled the trigger looking for the last round. The stage wasn't a total loss, as I was only one (1) point down in 15.88 seconds.

I've actually encountered light strikes frequently with Remington ammo. This is not the fault of the ammo. The strain screw was filed for a 7 pound 2 ounce pull, which is perfect with Federal ammo. To fix the problem, the screw was shimmed which brought the pull weight up to 7 pounds and 12 ounces. Unfortunately, this was still not enough. Luckily, my gunsmith Jimmy trimmed another screw that pulled at 8 pounds and 8 ounces just in case I had issues with the shim. A quick swap and I was back in the game for the rest of the stages. I'm so glad we cut another screw!

This stage was a disaster! It was the second to last stage of my match and I was starting to get a little clumsy. I changed my plan right before the buzzer and I think that might have thrown me off a bit. Here's how it all played out.

I slipped on the fault line (board) while stepping into the first position. The shots were good and I too a big step backward to the next position to fire my last two shots. The rounds stuck and as I plucked them out, I dropped my speed loader. I grabbed a fresh loader but didn't retrieve the old one. I earned a procedural for leaving live ammo on the ground. After the third position, I loaded on the move and managed to pull one round out with the speed loader. I probably should have bleeped the video, but...I didn't. It was mess but I was only one (1) point down in 35.19 seconds with that pesky  three (3) second procedural hurting my time.

This was the third stage of the day for my squad. After the misfire and subsequent screw swap of stage two, and the swinger on stage six, I was ready to do a little moving. I reloaded at position two with a clear plan in my mind, but an unfortunate make up on a steel popper messed up that up.

After knocking over the barrel at the final position, I took the last shot in my cylinder. I reloaded quickly, reengaged that target and addressed the final two paper targets. I guess it didn't hurt my plan all that much, as I needed to reload at that position anyway. I finished with one (1) point down in 31.54 seconds.

Stage six was limited to only six rounds. The rope was placed in the strong hand and on the buzzer, the shooter released the swinger, drew their downloaded firearm, and engaged the single target. My original plan was to shoot two on the left pause, two on the right pause, and the final two on the left pause. It didn't quite play out that way, but I was happy with it. The shooting sure wasn't fast, but I was only three (3) points down in 7.69 seconds. I heard a lot of other shooters with points down in the double digits.

As I promised above, here is the complete match video. I plan to video all of my matches from this point forward using my Go Pro Hero 5 Session and Sidekick Mount. I am also in the process of setting up a space to do table top reviews! In addition to a YouTube channel, these videos will also be Vimeo because of YouTube's ever changing policies. If you liked the videos, please like and subscribe!

Sadly, this will be my last match shooting the Model 66 Carry Optics. The reason for this change is not my dislike or boredom of this set up. It actually may be my favorite configuration thus far! I  removed the optic because I am shooting my first ICORE match at the end of June and decided to shoot the Smith & Wesson 929 in Open Division. More on that later!

As always, if you have any suggestions for future posts or would like to share your experience on the current topic please post below!
at May 30, 2018