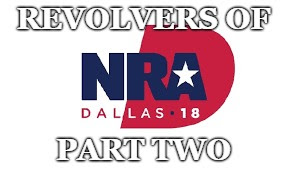 Welcome to Part Two of Revolvers of the NRA Annual Meeting 2018! Last week I discussed about half of the wheel guns I saw at the show, so this week we're looking into the other revolvers I photographed at the convention. While I visited Uberti's booth at the show, I didn't post any picture of these revolver because Taylors & Company imports this firearms. Plus, I featured a pair of those in Part One. I hope you enjoy the remaining revolvers of the NRAAM.


Colt is one of the oldest firearms manufacturers in the US and it all started with revolvers. Although Colt ceased production of it's revolvers in the late 20th Century, they have recently re-entered the revolver market with the new take on the Colt Cobra. The new Cobra is all stainless steel chambered in .38 Special +P that features a six shot cylinder, an easily replaceable front sight, and quality trigger all in a concealable package.

This year Colt has released another model, dubbed the Night Cobra, that may be even better suited for concealed carry. This new addition features a flat black diamond like coating, a tritium night sight, a bobbed hammer (to prevent the hammer snagging on clothing), and smooth G-10 grips that doesn't grab garments. These features are all very appealing to anyone who might wish to carry a snub nose revolver. I'd love to add one of these to my stable.

Kimber is known for producing 1911s but recently waded into the world of revolvers with the K6s. This line of wheel guns weighs in at 23 ounces and is the lightest six shot revolver chambered in .357 Magnum. It is loaded with other features like a replaceable front sight, a dovetailed rear sight with serrations, a match grade trigger, and checkered rubber stocks. While the stainless model was the first on the scene, Kimber was bound to release a variety of models. Here are two of my favorites from the show.

The K6s DC (Deep Cover) is similar to the Night Cobra in many respects, except for the concealed hammer and .357 Magnum cylinder. It features a matte black DLC coating, front and rear tritium night sights, and G-10 stocks. These features appear to make the DC a great option for concealed carry.

The other model I examined at the show was a dressier version of the K6s, the CDP (Custom Defensive Package). The barrel, cylinder, cylinder release, and trigger are all brushed stainless that contrasts with the matte black frame. Other features such as the tritium front and rear night sights and a checkered Rosewood stocks come standard with this revolver. I know it is a bit flashy, but I like the two tone finish more often than not!


When I shared the 2018 NRA Annual Meeting Preview on Reddit, a user reminded me to visit Charter Arms. I didn't know too much about the company except for some less than stellar reviews. Well, I ended up chatting with the owner and he really sold me on giving his revolvers a try. Charter Arms has been producing guns out of Connecticut since 1964 and offers a lifetime warranty if you do run into a problems. Charter Arms offers a large product line and here is a bit about the two I was most interested in.

I am a lefty and am of the opinion that pretty much every revolver is designed for right handed shooters. Well, the Charter Arms Southpaw is a mirror image designed for the wrong handed  revolver enthusiast. This seems like a great plan, but for anyone with a large amount of experience using a "normal" swing out cylinder, it may pose a problem. All of that muscle memory goes right out the window and if you spend the time to relearn on the lefty friendly model. Even though it may not be for me, if you are left handed and in the market for your one and only revolver, this may be right up your alley!

The other revolver I am interested in is the Charter Arms Classic Bulldog. The five shot cylinder is chambered in . 44 Special, a cartridge I've been interested in trying out. This model comes equipped with a three inch barrel (which I believe is the perfect length for an all-purpose revolver), a deep blued finish, and checkered walnut stocks. At 20 ounces, I bet it has a bit of recoil, but if you are someone who prefers a cartridge that starts with a .4x, this may be the revolver for you!

In Part One, I discussed the re-introduced Taurus Model 856. I was really impressed with that model, but I also wanted to discuss the new offering in .44 Magnum, the Raging Hunter. I mentioned earlier that I don't currently own revolvers chambered in .44 Special/.44 Magnum, but I'd be interested in giving one a try. I am a little worried about recoil, but the Raging Hunter weighs 55 ounces, has a ported barrel, a heavy duty frame lock, and a cushion rubber stock that should make it a comfortably shooting big bore. I also like the two-toned finish, which has the opposite scheme of the Kimber K6s CDP.


The other new revolver Taurus released this year is the Model 692 which comes in two different barrel lengths, three and six and a half inches, both ported to reduce recoil. The really impressive thing about this new wheel gun is the ability to swap cylinders with the push of a button. The 9mm cylinder is cut for Taurus' proprietary stellar clips. Both cylinders are have a seven shot capacity and are not fluted. I'm not sure the factory version is legal in any of the different competitive leagues in which I participate, but the swap-able cylinder feature is pretty impressive. I wish more companies did this.

North American Arms is a company that produces small single action revolvers that can always be in your pocket when you can't carry a larger handgun. The company chambers all of their mini wheel guns in .22 Long Rifle, .22 Magnum and even .22 Short. Many models can be purchased with an additional cylinder so you can swap out a .22 Mag cylinder for some cheap practice with .22LR.

While the NAA 22MS-P isn't exactly new, this model looked pretty neat as it features ports. Even though .22 Magnum doesn't have a lot of recoil, this model is perfect for recoil sensitive shooters who just want something on them for personal defense. I think something like this might be great option for a few members of my family if they choose to pursue a concealed carry license in the future.

The newest release from NAA is the Ranger II, a updated version of their popular Ranger. Now this is the revolver I'd like to add to my collection! I've mentioned my love of the top break design and this model features a working ejector. The latch wasn't hard to open, although I did accidentally engage it when trying to cock the hammer once. I'm sure that was a fluke. I don't own anything chambered in .22Mag, so perhaps this is the one for me!

Rock Island Armory has been producing steel framed snub nosed revolver since the 1970's, so this isn't exactly new, BUT it was new to me. The representative I chatted with explained that Rock Island purchased a design from Colt and has been making it ever since. The model that I liked the most is the M206 Spurless. It is an all steel frame that weighs in at one and a half pounds unloaded, so it shouldn't recoil all that much with .38 Special round. In fact, I don't think it is rated for +P ammunition. The checkered wood stocks felt comfortable, and I am starting to prefer bobbed hammers on all my double action revolvers. Seems like a solid purchase if you are in the market.

E.M.F Company has been producing quality single action since the mid 1950's for the film industry. When Colt stopped producing the Single Action Army, this company worked with Italian gun makers to find a suitable replacement. Pietta has been producing firearms for E.M.F. for decades and the models I handled  were of amazing quality.

I was born in raised in the city of New Orleans and discovered an interesting black powder revolver in my reading, the LeMat. Jean Alexander LeMat designed this in 1856 and it was seen in the hands of Confederate forces during the American Civil War. It is unique, featuring a nine shot .44 caliber cylinder and a .20 gauge shotgun barrel, perfect for mounted cavalry. E.M.F. and Pietta have come together to produce this faithful reproduction that I'm extremely interested in owning. I have not ventured into the world of black powder, but I plan to get into that with this revolver down the road. If anything, it will be a great conversation piece.

Well, that wraps up my recap of the revolvers I encountered at the 2018 NRA Annual Meeting! I met a large number of people, both trainers and representatives, who still like to carry and shoot revolvers despite the prevalence of auto-loaders. I'm glad I'm not the only one. I did my best to visit every booth that had a revolver for display. I apologize if I missed any wheel guns or didn't post a picture of your favorite. I really enjoyed the convention and hope to attend this event in the future!

As always, if you have any suggestions for future posts or would like to share your experience on the current topic please post below!
at May 16, 2018