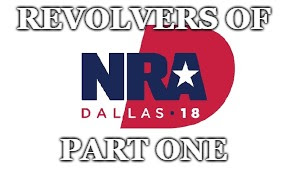 This trip was my first visit to the National Rifle Association Annual Meetings. I have been an NRA member for a few years, but the convention has never been close enough for me to visit. Luckily, the NRA decided to host it's event in Dallas, TX which is right down the road. Coincidentally, the best man in my upcoming wedding lives all of nine minutes from the Kay Bailey Convention Center.

This show floor was massive and I met quite a few folks (including reps, competitive shooters, YouTubers, and instructors) while walking around and took a ton of pictures. There are a lot of revolver aficionados out there still if you look. I ran into Mike, better known as Mrgunsngear on YouTube, who still enjoys shooting revolvers when he gets the chance. Without further ado here is part one of my highlights from the convention floor!


The first booth I visited at the show was Nighthawk Custom Firearms. Nighthawk is known primarily as a high end 1911 company, but the have recently partnered with Korth (a very fine German company) to import European revolvers. The Mongoose .357, was the finest revolver I handled at NRAAM. It features an adjustable trigger and can be ordered with a second cylinder in 9mm that does not require moon clips to function unlike my Smith & Wesson 929. This is a pretty convenient feature.

The amount of detail Korth and Nighthawk put into the Mongoose is incredible and I'd love to own one at some point in my life. While visiting their booth I was also hunting for another revolver that was not at the show, the Sky Hawk 9mm. This is an incredible little snubby features a shorter cylinder for the round that, like the Mongoose, does not require moon clips to function. I believe it would be a fantastic carry gun. Unfortunately, it appears Nighthawk is a little back ordered on this wheel gun, but hopefully I can snag one soon!

In previous posts, I have mentioned my affinity for the Chiappa Rhino series. I think the design is an evolutionary step for revolvers, and expect to see more companies follow this trend. I currently own a 200DS in .357 Mag that serves as a carry gun but, I have been waiting for three inch model to hit the market, particularly in a dark finish. I've mentioned before that I think three inch barrels are the perfect size for most tasks. This model with the green finish and wood stocks really caught my eye! I hope to keep adding different models like this and the Charging Rhino to my collection. I can't express my infatuation with this design, with its' modern design and low barrel axis.

It is my understanding that Taurus Firearms have a bit of a bad reputation when it comes to quality control. I have never owned one of their revolvers, but I have heard they have a better track record than the automatics. This year Taurus released a few new wheel guns to their product line, including the re-released model 856. This model features a six shot cylinder in a package that is only slightly larger than their five shot model, the 85. According to their website, the 856 only weighs 22 ounces, which is just one ounce heavier than the model 85! That seems like pretty impressive engineering to me. The trigger was fairly smooth. With an MSRP of $329, I'd assume the street price will be closer to $300 which is very affordable for a wheel gun. I'll be discussing the two new models in Part 2.


Smith & Wesson was very well represented at the show. Their both contained samples of nearly every revolver, among their many firearms, the company currently produces. The big surprise of the show, on the revolver side of the house at least, was the introduction of two "new" K-frame revolvers. These have been dubbed the Model 19 Classic and the Model 19 Carry Comp. These were a very tightly guarded secret before the show. Smith keeps new releases under tight wraps since a recent leak.

The Model 19 was one of S&Ws most popular revolvers until it was discontinued in 1999. The Classic is offered with a four and a quarter inch barrel and square butt, while the Carry Comp features a three inch ported barrel and round butt. I'm actually more interested in the Carry Comp, but that's just me. I am excited to see the return of the model 19 to Smith's line up.

By the time I made it the Ruger booth at the show, it was packed. I waited in line to get to the center display to handle the new GP100 chambered in 10mm. This model is similar in appearance to the GP100 Match Champion chambered in .357 Magnum/.38 Special, without the slab sided barrel. I really liked the feel of the checkering on the wooden stocks, but I'd imagine they'd get uncomfortable with extended firing.

I am mildly interested in the revolver, but not for the 10mm Auto capability. If I were to purchase this wheel gun, I'd be shooting light loaded .40 S&Ws in the Revolver-Enhanced Division at IDPA matches. The .40 is arguably a shortened 10mm, should have less recoil, and load quickly with the provided moon clips. I might pick one up down the road...unless I come across a four inch Chiappa Rhino in .40 S&W for a good price.

I really enjoy reading about the Wild West even if it isn't all that wild like the movies suggest. I am particularly enamored with the single action revolvers wielded by cowboys and desperadoes depicted in films. My fiance purchased a Cimarron Frontier in .45 Colt for my back in 2016. I really enjoy shooting that the Frontier, but I've recently had some issues with it. A few weeks prior to NRAAM, I met a representative from Taylors & Company who sold me on giving her brand a try.

I hope to test a Schofield very soon, but I also discovered Taylors & Co Smoke Wagon with a short stroke kit. Man does that shorter throw on the hammer really work! Even neater than that, the company offers a tuned model with an enhanced action and parts. The company also produces a version with an extended grip, the Gunfighter Short Stroke, that felt even better in my hands. I will definitely add one or two of these to my collection in the future. If you are interested in getting into Cowboy Action or just like single action revolvers, this may be the brand for you!

This wraps up Part One! I'm ready to test as many of these revolvers as possible, especially the Mongoose. Remember this is only about half of the revolvers of interest at NRAAM in Dallas. Next week's post will include Colt, Kimber, Rock Island Armory, Charter Arms, North American Arms, and E.M.F. Stay tuned for more revolver coverage!

As always, if you have any suggestions for future posts or would like to share your experience on the current topic please post below!
at May 09, 2018